Chef-patron Steven Smith has been selected to take part in two prestigious events featuring some of the stars of the British culinary scene.

Steven will be one of eight ‘visionary’ chefs featured in the national Great 8 series of charity dinners – a unique initiative between visionarydining.com and Hospitality Action.

He is joined by Simon Rogan of L’Enclume in Cartmel, Michael Wignall of The Latymer in Surrey, Kenny Atkinson of Rockliffe Hall in Darlington, all with Michelin stars, plus Aiden Byrne of The Church Green in Lymm, Chris Holland of The Alderley in Cheshire, The Hill Brothers of Aldwark Arms in North Yorkshire and Rupert Rowley of Fischers Baslow in Derbyshire. The chefs will all host an eight-course tasting menu at their own restaurant, each contributing one course on the night, with events staged every two months.

Steven said: “I’m delighted to have been chosen to take part in the Great 8, and to be cooking alongside guys who are at the top of their game. It’s also great to be helping out with such a great cause as Hospitality Action.”

Gordon Cartwright, managing director of VisionaryDining.com, who are organising the events, said: “We have chosen Steven because he demonstrates an imaginative philosophy through his cooking that makes him unique. Hospitality Action is a great cause and we hope all food lovers will support the charity by booking early for what promises to be a fantastic event.”

Hospitality Action is a benevolent fund offering vital assistance to all who work, or have worked within hospitality in the UK and who find themselves in medical or financial crisis.

Steven will also feature in another high-profile event benefitting the charity, the Visionary Chef of the Year national final, held at the Lakes Hotel School on October 20th, which will determine the overall winner of the Visionary Chef of the Year title. To reach the final, professional chefs had to recreate dishes from the star chef’s own restaurant in 11 countrywide heats. Steven will be paired with the winner of the final regional heat to produce the ‘Four Legs’ meat dish.

He is pictured at the launch of the Pro Chef Training finals with other high-flying guest chefs in front of Concorde at Manchester Airport. 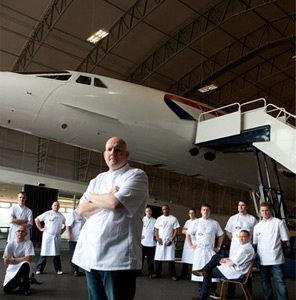